The present (and future) of collective self-consumption in Spain – Opinion

The Royal Decree RD244 (April 2019) in Spain, classifies and defines the different types of self-consumption. Until recently, there was only one possibility: individual self-consumption connected to an internal network (aka. apartment complexes). However, with the new rule, the definition of collective self-consumption is introduced, so that several consumers can associate with the same generation plant, an addition that will boost self-consumption in communities of consumers or between companies and industries located in the same location.

In addition, the concept of “production facility close to points of consumption and associated with them” is defined. Within this definition, it is possible to carry out self-consumption with generation facilities located, not only in the same house, but also among consumers that are located in the vicinity (<500 meters radius) and connected in the LV (Low Voltage).

The Royal Decree also opens the door for a consumer to take advantage of the neighbor’s energy surplus and co-participate in self-consumption, if the neighbor is not consuming his/her share of energy. This scheme would be possible with the development of “dynamic coefficients”; at the moment, however, the RD only defines the existence of static coefficients.

In the following lines, we present a series of questions and answers, which we face before this moment of legislative uncertainty around collective self-consumption.

How to size a collective self-consumption facility?

There is no single dimension that can be taken as a reference, since it depends on the future consumption profile that the group of associated consumers will have. And we cannot predict the future, but we can definitely estimate it. What seems sensible is to make a joint analysis of the hourly consumption of the entire previous year for all the consumers that will be associated with the collective installation.

By having this information as well as the location of the plant, we can calculate what would have been the optimal installation power for the previous year (based on their actual hourly consumption profile) and use this analysis as a reference for the sizing of the plant.

This would be an initial approach that would allow us to limit the installation power to the consumers’ needs, but it will not prevent the installation from having surpluses at times, since the consumption profile of the participants will surely vary.

The fact that there are surpluses with a distribution of static coefficients, means that there will also be a surplus valuation mechanism, either by simplified compensation in invoice or by selling the excess production. This can be an incentive to oversize the installation, if the ROI is still attractive or if, future increase of self-consumers associated with the installation are expected/foreseen. This suggests that one should consider a range of sizing that is attractive for self-consumption partners.

Who pays for the installation?

This is a very interesting topic, since we tend to think that the installation has to be paid among the self-consumers themselves, but this does not have to be this way.

It depends on the business model that applies on the commercial exploitation of the plant; the person who finances the installation will be an individual or a group, or a company, which will receive income depending on the yield given to the production generated by the plant.

Thus, to optimize the financial performance of the plant, we consider that the peak amount of produced energy must be consumed locally, reducing surpluses to zero (i.e. exports to the grid). To achieve this, we consider that the local distribution of energy produced by the installation must be optimal and must be adjusted according to the needs of each consumer.’

How to optimize the distribution of production among all associated self-consumers? “Static” vs “dynamic” energy distribution coefficients.

It is clear that a static coefficient of energy distribution is not the optimal way to distribute the energy produced by a collective installation. At Pylon Network, we find it necessary to integrate a dynamic energy distribution system that allows the energy produced to be distributed hourly to all the participants of the collective self-consumption. In this way, we manage to self-consume the maximum possible amount of energy during each hour, increasing the financial performance of the installation, and the savings achieved by the self-consumers (savings of 50% in the price of self-consumed energy). In other words, a win-win situation for investors and consumers. And let’s not forget the electricity retailers (aka. utilities), that are free to join this model and since they are the ones that finance and manage the production among the associated customers, we would be talking about a triple-win situation.

At Pylon, we are already doing some simulations of static vs dynamic energy distributions. For these purposes, we take real production data from a solar installation and match it with the real hour-consumption data of a group of four self-consumers. This is from the pilot that we announced last week (Valencia, Spain) and a short presentation can be found in this video (English subtitles available). 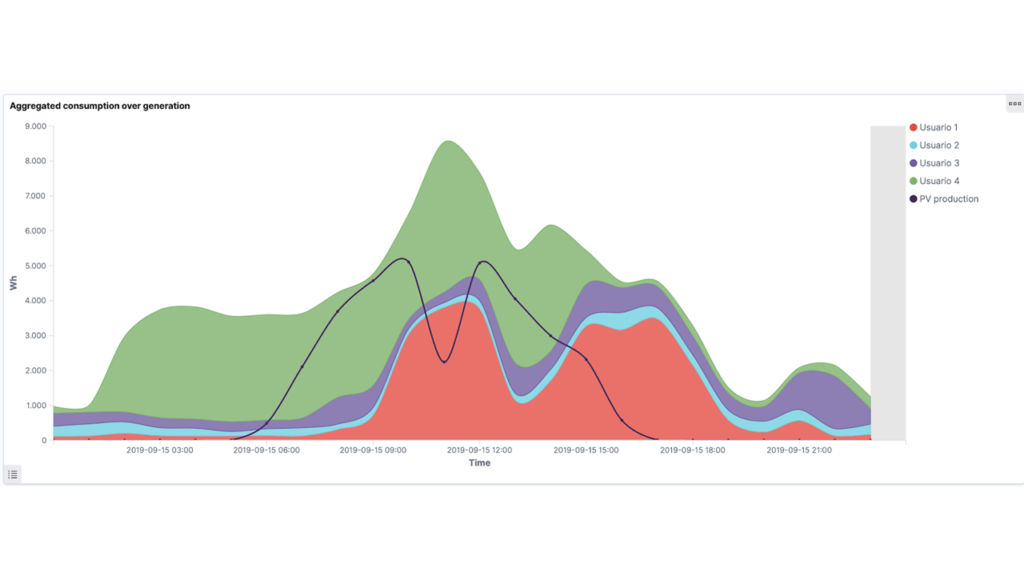 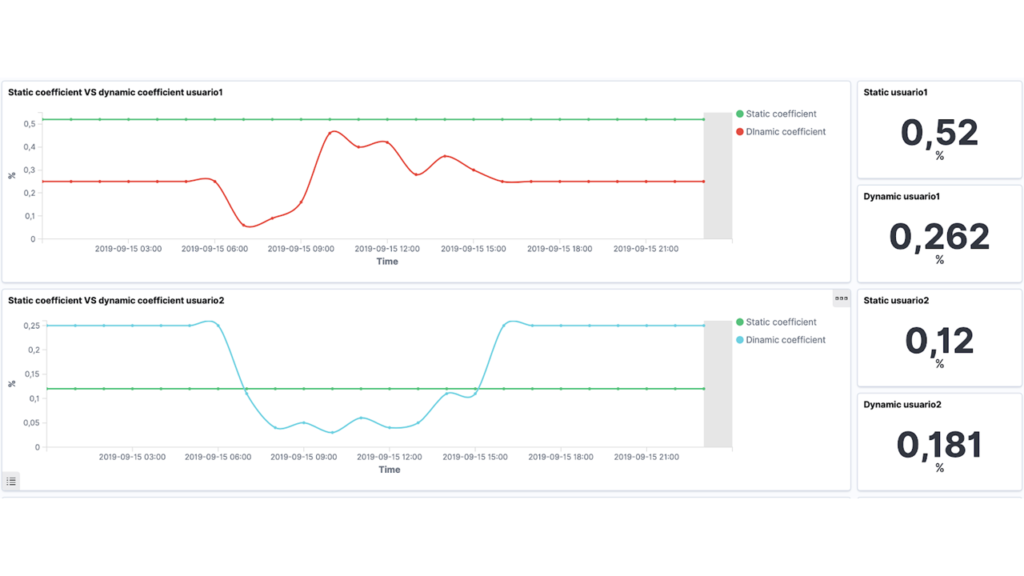 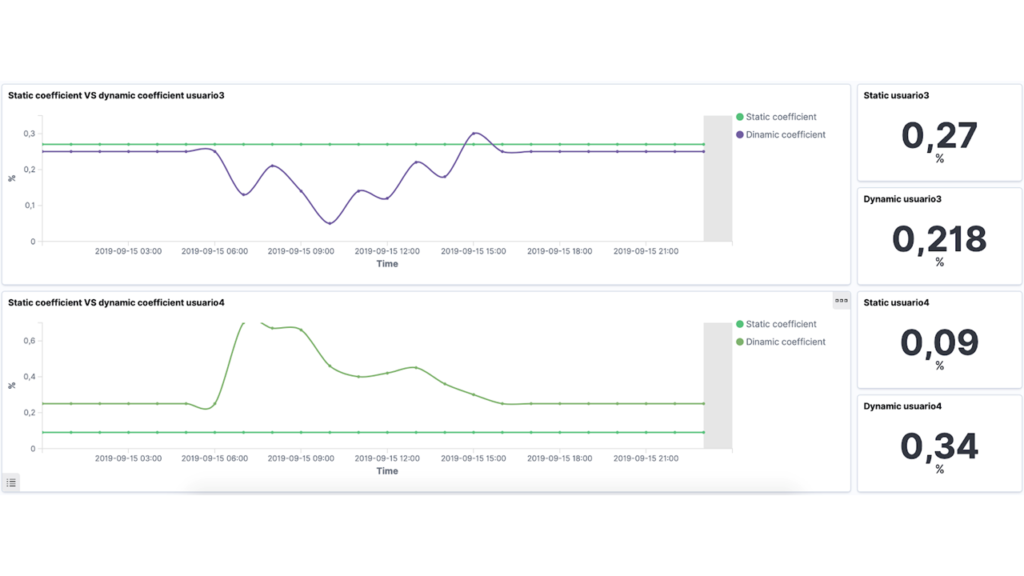 The results that we obtain are impressive, managing to reduce the surpluses of the installation to zero in many days of the year. More screenshots of the pilot software that we have been running in real environment, can be seen below. This is just a first taste of the preliminary results that we have obtained and in the near future, we will release more details about our findings. 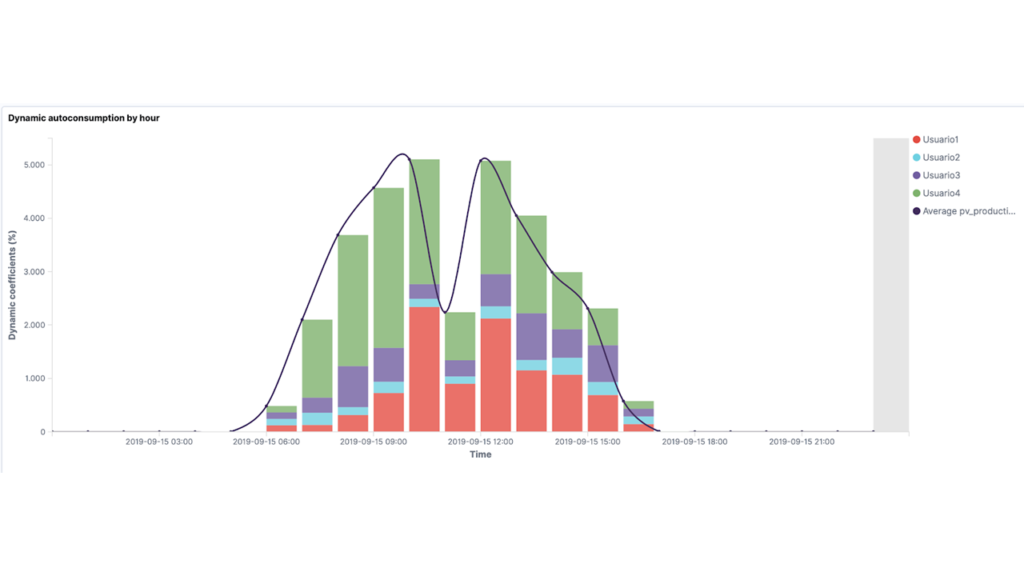 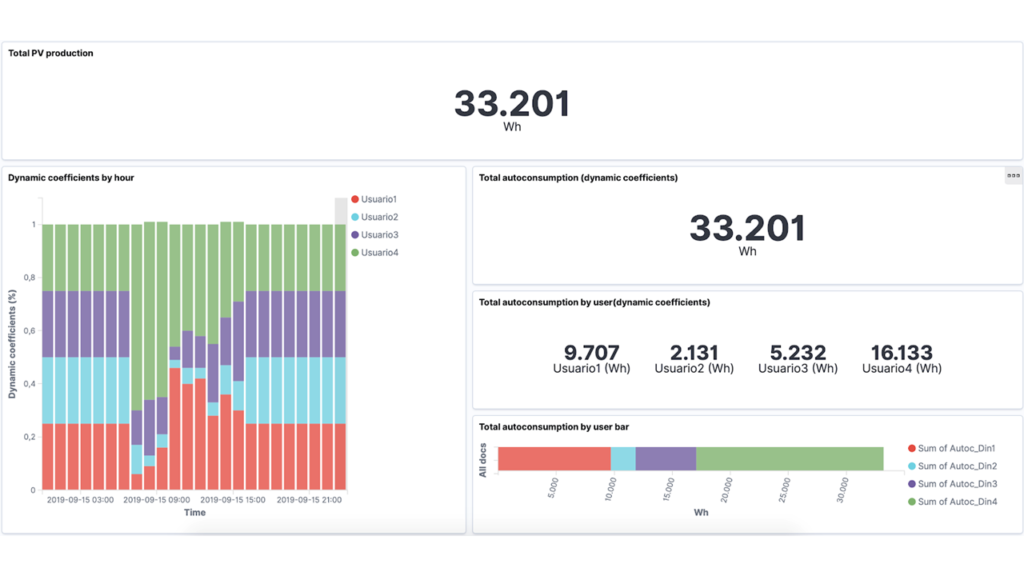 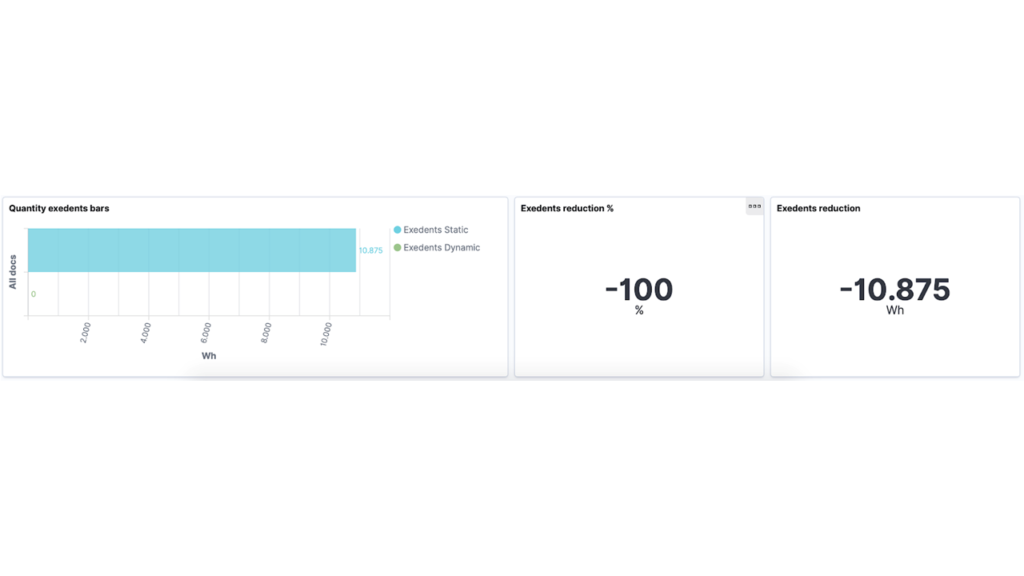 How, when and who will manage and communicate these coefficients? What communication protocol will be used?

As indicated by the regulations, in a collective self-consumption where there is more than one consumer associated with the generation facilities, all must belong to the same type of self-consumption and have to communicate with the distribution company (DSO) – either directly, or through its retailer – via the same agreement signed by all participants that cover the criteria for the distribution of self-consumption, depending on the contracted power of consumers, their financial contribution to the associated generation facility or any other criteria (in the absence of a notification of agreement of distribution coefficients, the distributor will calculate them, depending on the contracted power).

At Pylon, we find it critical that these distribution coefficients are communicated periodically, allowing for at least hourly frequency of the dynamic distribution.

The market regulator in Spain, CNMC, had to adapt the communication formats and protocols existing between the distribution and marketing companies to incorporate the regulations on self-consumption (Royal Decree 244/2019, of April 5), in accordance with the provisions of the Resolution of December 20, 2016.

Additionally, the CNMC must approve a new file format for exchanging information between distributors and Communities or Autonomous Cities, so that consumers connected at low voltage and with installed production power of less than 100 kWp self-consumption facility, can see modified ex officio, their access contracts.

The period of open consultation for both resolutions was closed on September 13 2019 so, hopefully, the news will be coming out soon.

What business models can arise behind these collective solar installations?

Collective self-consumption can be a great opportunity for electric utilities, as they can offer more competitive electricity retailing models, where the customer can receive locally-produced renewable energy and in a more economical way. Without neglecting that it can also play out as a customer fidelity mechanism for the retailers.

However, It will be necessary to be cautious and read the small letters of the offer and the contracted price, to avoid that in the long run, the costs for the consumer will not increase.

A critical barrier is the accessibility of granular (hourly) energy data (both consumption and production). The exchange of information between the parties, in a quick and transparent way, is key. Without good communication and the needed granularity of data it will be impossible to perform all these dynamic distributions, greatly limiting the potential of collective self-consumption.

We need to take advantage of the existing infrastructure – i.e. the meters already installed in all consumption points of the system – capable of capturing hourly consumption data. This way, it will be easy to scale the system, without having to install extra hardware that could be an inconvenience and / or a financial barrier for the consumer.

What legal structures must be in place to implement collective self-consumption schemes?

It should not be forgotten that no matter how mature the technology is, there should be a contract that supports and defines everything that happens between the parties. The collective self-consumption model will be associated with a series of contracts, which will define many variables that can later be integrated into a software so that everything is self-managed, as we do in the simulation presented in the screenshots above.

At Pylon Network, together with our experienced lawyers, we are already working on the legal aspects that support the software we have developed, in order to show the energy market stakeholders and regulators, that collective self-consumption is – already – a reality.

Join us on Telegram and talk directly with the team!